For Easter I teamed up with Hongo (again) for a traditional Easter salmon hunting mission in southwest WA. Our location of choice – Deepdene Beach, near Augusta – the place where both Hong and I landed our first salmon many years ago.

For this camp, for food, we decided to take only potatoes, carrots, onions and flour. The idea was spawned from Spudshed’s 9 cents per kilo sale on potatoes, carrots and onions and the desire to do away with the old wussy excuse of “Wah Wah Australian Salmon aren’t very nice eating fish I’m a big fussy baby” and actually eat the salmon we catch, along with any other fish we managed to land. This would be a good motivator to actually get off our ass and do some fishing. And maybe, when we’re hungry, Australian Salmon might actually taste good. That’s what we hoped. 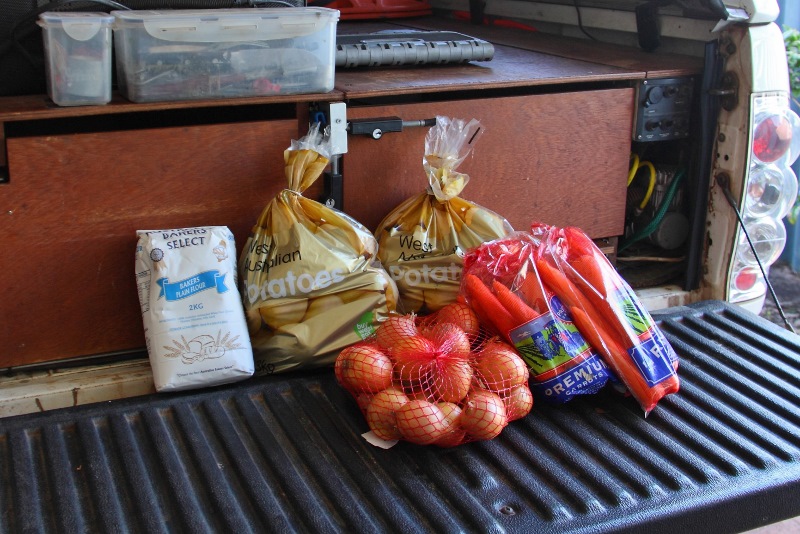 The food we took for a six day camp for two people.

Despite not being on the 9 cents / kilo list and being quite expensive (at a cost of several dollars), we included flour in our menu so we could cook up some beer damper to add some variation to our diets. So armed with Hong’s fish smoker and less than $15 worth of food, we set off on our six day adventure (we also had condiments like salt, oil, chilli powder, garlic and tomato sauce and of course a couple of cartons of beer).

First day on camp saw a salmon caught and immediately filleted and put into the smoker. It’s been a few years since last eating Australian Salmon so I had forgotten it’s unique smell and flavour. As soon as that smoker cranked up I was reminded like a swift punch to the face. Damn that stuff stinks like sh!t when cooking! A pungent, asphyxiating fishy bouquet that permeates far and wide. The taste is similar. We struggled through eating most of what we cooked and I suffered the rest of the day with a rotten fish taste in my mouth. How much more salmon did we eat for the remainder of the camp? ZERO. 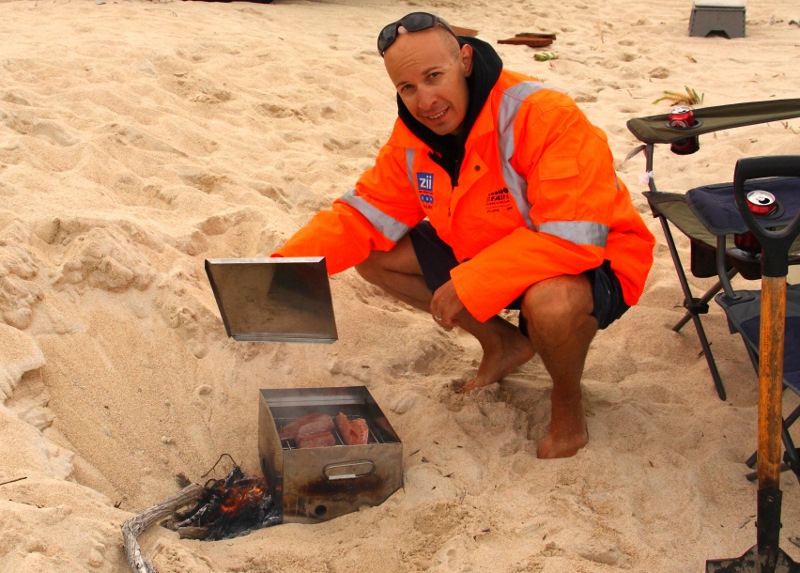 Lift the lid and the campsite is engulfed in the pungent aroma of Australian Salmon.

The occasional, rawer chunk of salmon tasted not too bad. We made a mistake with the smoker, putting it on the fire instead of using the little metho burner. This turned it into an oven and overcooked the salmon. The more cooked, the worse it tastes. We planned to try again but were somewhat disillusioned by the experience and managed to catch plenty of better stuff to keep us fed (mulloway, wobbegong shark, silver brim, herring and whiting).

Check out these dudes who rocked up in their V8 powered four wheel drives and set up shop right in front of our camp. Out of several kilometers of empty beach! And proceeded to fish and make noise into the early hours of the morning and then pack up and leave. Nice one. That’s our tent in the left foreground.

Did we make it on the news? Whilst Hong was battling to land a large salmon this helicopter hovered above us for a bit. It was a pretty big salmon, I’d say yes it was newsworthy. I hope my hair looked ok in the shoot.

Some friends joined us for a few nights. I reluctantly admit we did steal some of their sausages, baked beans and Easter eggs to supplement our diet. Some other noteworthy events include assisting a four wheel drive recovery for some dude who thought it was a good idea to do a u-turn into the water, a trip to Augusta for beer and lunch at the pub on Easter Sunday and an Easter egg hunt around our camp site.

Simple food was fun. Easy to pack, no lengthy food prep, no washing up. Plus it’s super cheap. Next year I think we need to toughen up and eat a bit more salmon!