Why You Shouldn’t Support Mandatory Vaccinations

Mud Whelks, also known as longbums, are a type of mangrove snail with conical shaped shells. There are two main types found in Northern Australia – telescopium telescopium and terebralia. The shells of each type are slightly different but both are long and conical. The telescopium variety are larger, with the opening spiralling out of the end of the shell, whereas terebralia are smaller with a flared opening more like a traditional snail. Take care when gathering mud whelks, as they can easily be mistaken for icecream cones.

Mud whelks are found in the mud around mangroves at low tide. They’re usually on the mud surface or slithering up mangrove roots and branches. This is crocodile habitat so take care if you go looking for mud whelks. You also need to watch out for cone snails. Cone snails have similarly cone shaped shells. The main difference is the opening which on a cone snail is a slit that runs across most of the length of the shell. Cone snails are venomous and their sting can sometimes be fatal. They are found across Australia’s northern waters.

Mud Whelks are pretty big, especially the telescopium variety, perhaps their size being the origin of the common name longbum. Due to their size they can make a reasonable meal if a few are collected. They must be cooked. Traditionally they are cooked with the pointy end of the shell facing down, shoved into some hot coals, with the shell opening pointing up and clear of the ash and grit. They can also be boiled. Every time I cook them the traditional way they taste really salty. Next time I’ll try boiling in fresh water – perhaps it will remove some of the salt. Apart from being salty, they have a pleasant seafood mussel like flavour. Cook them until they are firm – maybe around 10 minutes. An undercooked mud whelk is soft, gooey, slimy and gelatinous.  To eat, poke a sharp metal object, like a very small flat head screwdriver, into the opening, snag the meat and slowly pull it out of the shell. Remove the tough plasticy mouth piece then shove the whole snail into your mouth.

Mud whelks can also be used as bait. When raw it’s difficult to pull the whole snail out of the shell. In this case you need to smash open the extremely tough shell. I thought they’d be brittle and break easily like a common snail but actually can withstand a good swing from a hammer without cracking. Super tough they are. Once you get the snail, chuck it on a hook, cast it into the water and wait for dinner, hopefully barramundi. More likely a catfish. 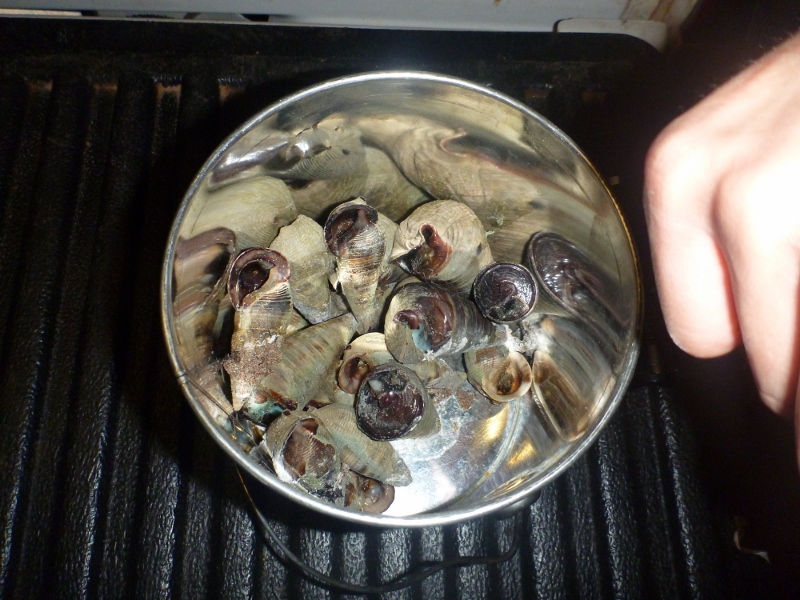