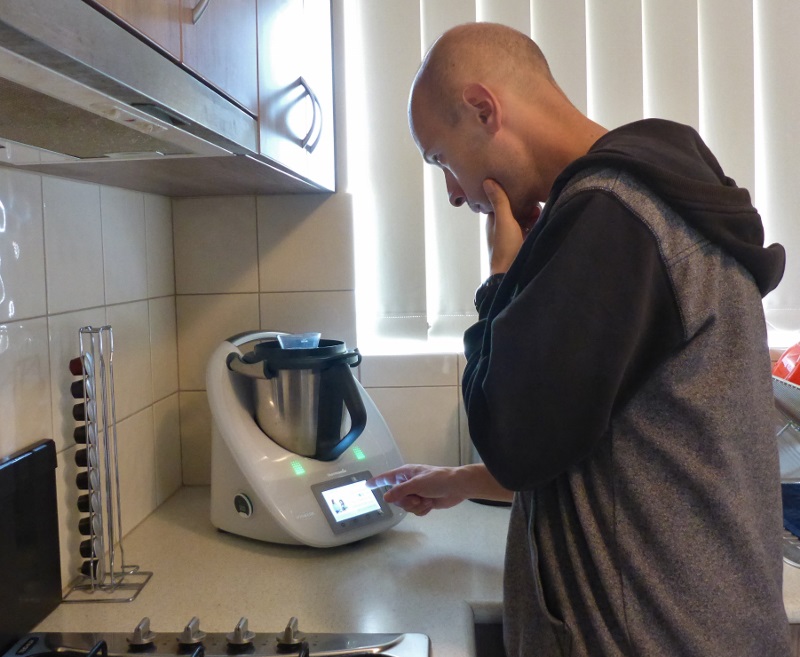 There’s no doubt that since my initial Thermomix review I’ve done some pretty manly things like fishing and camping. This has been unequivocally proven in subsequent blog posts with conclusive photo evidence. I’m as macho as ever but that isn’t going to stop me from checking out the newest, fanciest, most expensive kitchen appliance in the world – the Thermomix TM5.

Unlike traditional sales methods, there’s no old model discount sales when it comes to pyramid schemes. This lead to the new TM5 Thermomix being released amid controversy in Australia. The old TM31 unit was being sold at full price with no indication that a new model was being introduced. The buyers felt ripped off, having not been informed and having no choice in delaying purchase for the new model whilst being offered no discount on the old model. Some buyers even felt they were being pressured to hurry with the transaction to ensure the old stock was cleared out. The saga earned Thermomix a shonky award by choice.com.au.

People shouldn’t be surprised when they get ripped off when buying something from a pyramid scheme. It’s part of the experience!

Rampant ripping off aside, I got a hold of a friend’s TM5 Thermomix to test it out and compare to the old model. My wife and I have the old TM31 Thermomix and have not upgraded to the new one. I’m not an expert on the new model, having only given it a short test drive.

This article focuses mainly on old Thermomix vs new Thermomix. For a more in-depth Thermomix review, refer to the original Thermomix Review – A Man’s Perspective. That article goes into more detail on price, performance, service, pyramid schemes, Thermomix alternatives and taking the Thermomix camping. Nearly everything in that article is relevant to the new model.

My initial inspection of the new Thermomix identified the following differences to the old one:

Like the old one, the new Thermomix is ridiculously expensive. The price is the same as what the old one was going for. It’s always going to be very expensive given the pyramid scheme sales method.

The TM5 Thermomix is a quality unit. It’s heavy and feels solid. It should last a while. It’s a premium appliance, as reflected by the astronomical price.

She’s a big girl though, the new Thermomix. Much bigger than the old one. The new one is 3.3cm taller, 4.8cm wider, 4.1cm deeper and 1.4kg heavier than the old one. That’s pretty significant relative to the overall dimensions and weight. That’s 22% heavier and nearly 50% greater volume! Whoa there Thermomix, you gotta trim up a bit. I don’t think the new one will fit in the drawers in the back of my hilux like the old one does.

The bigger mixing bowl and accommodating for the bigger steaming accessories are partly responsible for the bulk of the new model. This is good because it allows you to do slightly bigger cookups. But most of the extra weight and size I’m guessing is due to the fancy actuated lid locking mechanism. This could pose a problem for long term reliability, since there are extra actuators that the old thermomix did not have. However the old Thermomix is open to abuse of the manual lid locking system which can also cause reliability problems.

The greater bulk of the new Thermomix means it takes up more space on the kitchen bench which is a bummer if you have a small kitchen or want to travel with it. If your kitchen is limited to bench space with overhead cupboards then the new Thermomix might be a big hassle. The old one is already a bit too tall to operate easily near overhead cupboards. The new one is even taller.

Apart from the new interface and lid locking system, the TM5 Thermomix performs exactly the same as the TM31. The specifications are very similar. The heating and blending power are identical. The motor and variable speed drive system seem to be the same in operation. The noise of the new one even sounds exactly the same as the old one, not only in loudness but also in the timbre of the whirring note it produces. Some Thermomix die-hards have reported less noise with the new model. Maybe a sound level meter could measure the difference but my ears couldn’t. Crank it up and it’s noisy.

Product marketing 101: suck in new buyers by slapping a touch screen on the new model. This applies to everything from a fridge to a car to a washing machine. The Thermomix also abides by this law of nature. The new model has been gizmoed up with the inclusion of a touch screen interface. Gone are the perfectly functional and reliable buttons.

The touch screen offers no performance benefit. Actually it’s worse. Dedicated buttons are easier and faster to use than selecting different parameters to adjust through a touch screen. Buttons can also be easily operated even when you’ve spilled some chocolate fudge sauce over the panel or your fingers are covered in dough. In terms of pure operation of the unit, I prefer the old buttons.

I also worry about the robustness of the touch screen, particularly if travelling with the Thermomix. Our TM31 Thermomix has had stuff fall on top of the control panel whilst driving. Combine this with a few hundred kilometers of corrugations and I think we’d have a broken touch screen if we had the new model.

The touch screen does facilitate a significant feature – on screen recipe instructions. With the old model you had to use this:

But with the new model, instead of the recipe book, you can use this memory chip:

On the surface this seems like a good feature and I’m sure many people love it. Some people even call it “revolutionary.” However, in my opinion, it isn’t going to impact the experience much. How hard is using a book? I’m highly skilled at reading a book and turning its pages so the touch screen does not offer much to me. I also prefer the book since it allows rapid flicking between different pages, if for example you’re making your own shit up but using a few different recipes as a guide. Of course you can still operate the new Thermomix just like the old one, following instructions in a classical book from the stone age period.

I do like that the touch screen recipes negate the need to carry around the book. This would be useful if using the Thermomix in a caravan or taking it camping. No book to take with you and clutter up your limited bench space. No risk of losing the book or mucking it up with camp grime. Too bad the extra bulk of the new Thermomix could store about ten books!

On the old Thermomix, to lock the lid, you had the very arduous task of using your hands to rotate the lid into the locked position. Not so in the new Thermomix. Just ramp up the speed dial and the lid locks in automatically via a couple of electronically actuated locking clasps on each side of the lid.

Usually I’m against this sort of automation, since it introduces unnecessary complexity, expense and points of failure for little returns. I’ve never found it difficult to manually lock in the lid. However the actuated lid locking mechanism on the new Thermomix does get rid of the crappy lid and speed dial interlocks that I discussed in the old review. Just turn the dial and go for it. In terms of operation it’s good but I do wonder whether it’s worth the penalty in size, weight and complexity.

Will I Get the New Model?

Are you crazy? I’ve already forked out way too much for the old model. I have no problems using a book or rotating a lid or pressing buttons. Actually I enjoy using my brain and body vs replacing them with sensors and actuators. The old Thermomix stays. Forever.

If you already have the old Thermomix then I would recommend against upgrading. Save your money and enjoy some other hobbies or travel. The enhancements aren’t going to return much in terms of real benefits. If you want me to think you’re a dumbass consumer sucker then go ahead, upgrade.

If you don’t already have a Thermomix then I still recommend that you should save your money and enjoy some hobbies and travel. Just like in my original review, I still think the Thermomix is overpriced. This will always be the case for as long as it’s sold in a pyramid scheme arrangement. Cut the price by half and I’d think about it.

However the Thermomix is a quality unit and it’s up to the individual to decide what he or she values. I do like clearing out the clutter of many kitchen gizmos and replacing them all with one appliance. The Thermomix is something to consider if you’re into minimalism and efficiency and not too concerned about price. This philosophy is somewhat contradicted if you upgrade to the new model every time it comes out, which is why I’ll always keep the old one.

For more information on the Thermomix performance and benefits check out my original review and decide for yourself whether it’s worth the colossal price.

How to Make Hard Apple Cider

back to Australian Places and General Travel