How to Catch Squid

Squid are great. Easy to catch, good to eat, good for bait. They may not hold the same prestige as say catching a huge barra but they’re good fun nonetheless. Squid, calamari, aero squid and arrow squid are all pretty much the same stuff. This article runs through how to catch squid from a land based perspective. The techniques and hints presented here are also applicable to catching cuttlefish.

Sticking with the idea that squid prefer calm areas, they also don’t seem to be as active when conditions are choppy, windy, the swell is up or the water is murky. Best conditions are little wind, little swell and clear water. In terms of tide, moon etc – I don’t pay much attention to that stuff. Some people have their theories but I haven’t found any correlation. Apparently they are more active when there is no moon but I can’t say for sure. I wouldn’t let the moon spoil a planned squidding session.

Squid can be caught throughout the year during all seasons. The best time of the day is early morning for a few hours from sunrise, and early evening a couple of hours before and after sunset. Squid can also be caught late into the night. The least productive time is the middle of the day when the sun is high and bright. I’ve heard that during the peak of the day you can still find squid deeper in the water. I can’t confirm this, it’s mainly applicable when you’re on a boat rather than land based where you don’t have much choice.

I’ve caught lot’s of squid with no regard to tides or moon or whether it’s under a light at night or not. That’s why I don’t feel it’s necessary to place too much weight on those parameters. More important is fish in a reasonable habitat that’s not too choppy and the right times of the day.

Squid lures are called squid jigs. It’s because of the erratic retrieval technique – jigging. A squid jig looks like this:

I use the cheapest squid jigs I can find. I’m a tightass. The squid jig which holds the record for the most squid I’ve ever caught on one jig is in the photo below: 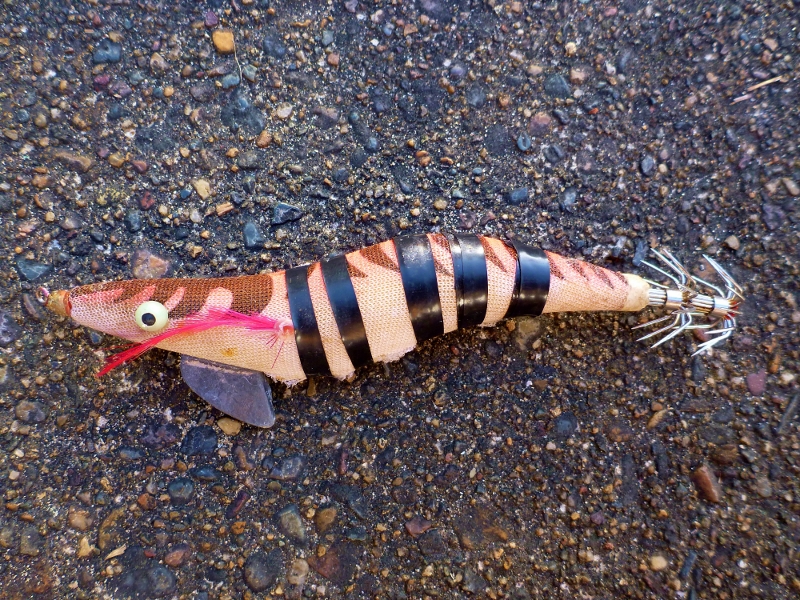 I got this squid jig in the $2 bargain box from my local tackle store. After catching a few squid the cloth covering began to separate. I wasn’t happy with my $2 investment returning only a few squid so I fixed it with some PVC duct tape. You’ll notice the strips of duct tape look like the stripes of a prawn. This isn’t the first time I’ve done a dodgy field repair on a lure. Being a huge cheapskate means it happens every now and then, for example the photo below where I used no more gaps to fix a soft plastic lure.

I’ve since caught many squid with my duct tape repaired jig and the fluoro pink colour has badly faded from frequent use. Perhaps the strips of duct tape enhanced its squid attracting ability. Regardless, I don’t reckon expensive jigs attract squid any better than the al-cheapos. I will admit that a good quality lure will last longer and probably won’t need to be repaired with duct tape after catching a few squid and the ring on the end will be less likely to rip off under load. 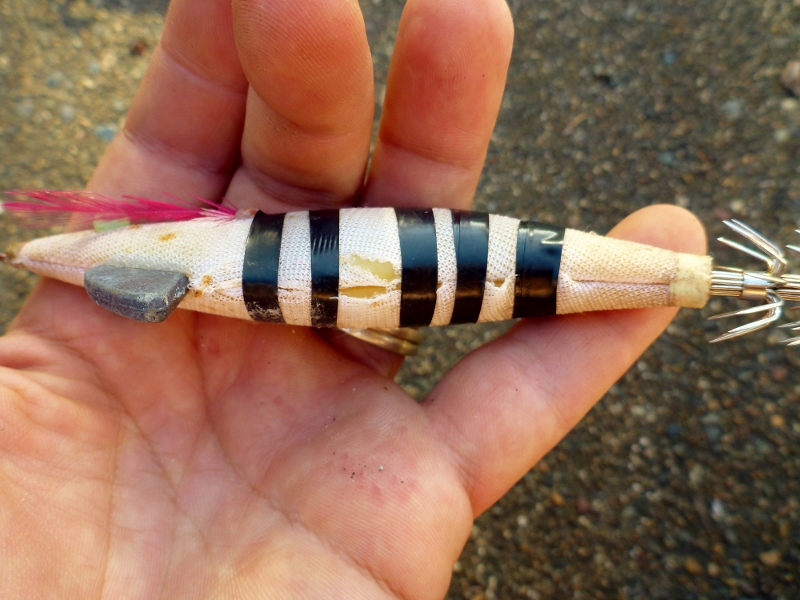 My al-cheapo squid jig also glows in the dark. I think at night having a luminous jig may help to excite some squid. Charge it up by holding it under a light source for a minute or two.

I have no favourite jig colour. I’ve caught squid on all colours. Have a few different colours in your tackle box so you can switch around if you’re having no luck.

Squid hang around in the cover of the sea grass so you want to get your jig as close to the bottom as possible. The way I do this is as follows:

Now that you’ve placed your jig close to the bottom you want to imitate the action of a prawn. Jerk the rod quickly a few times in quick succession, let the jig float motionless for a second or two, reel in the slack line and repeat. Continue until you’ve completely retrieved the jig. It’s important to let the jig be motionless several times during the retrieve. The motion attracts the attention of nearby squid but some squid will only strike when the jig isn’t moving. If quick jerks aren’t working you may want to try a slower lift and drop. Lift the rod, drop the rod and let the line be slack for a couple of seconds then reel in the slack line and repeat.

Be persistent. Sometimes squid are timid and won’t strike every time. Often you’ll see a squid chasing your lure but not striking. The only thing you can do is keep trying. Vary your retrieval method and keep trying. Squid also come in schools. So even if you’re seeing nothing and feeling nothing, keep trying. When a school comes along you’ll haul in many squid in quick succession.

Once you hook up a squid, reel in steady but not quickly. Squid tentacles are delicate and you don’t want to rip the jig spikes out. Do not allow the line to become slack otherwise the jig spikes can slip out and free the squid. Take care when landing the squid. There’s a couple of reasons for this. Firstly the squid will squirt ink at you. Secondly the weight of the squid out of water may be enough to rip the jig spikes out of the tentacles (use a net if you can). Lastly the squid’s beak can inflict a nasty bite. If you are going to handle the squid, grab it above the eyes on the tube and stay clear of the pointy end under the head.

Cleaning squid can be a bit messy but you get good at it with practise. There’s some good videos on youtube showing how to clean squid but I’ll provide a quick explanation here in case you’re with Telstra and data is too expensive to stream videos:

When out in the bush I only have one way of cooking squid – shallow fry. Use high temp and fry for about a minute with garlic, salt, pepper, chilly and lemon juice. Simple and effective. Don’t overcook else it will become too chewy. Squid freezes well so if you’ve had a big haul that’s too much to eat in one session just clean it and freeze it.

Hopefully this article has given you some tips to help you catch some squid. Good luck and happy jigging!

Excess squid cleaned and ready to be frozen after a big haul at Denial Bay. 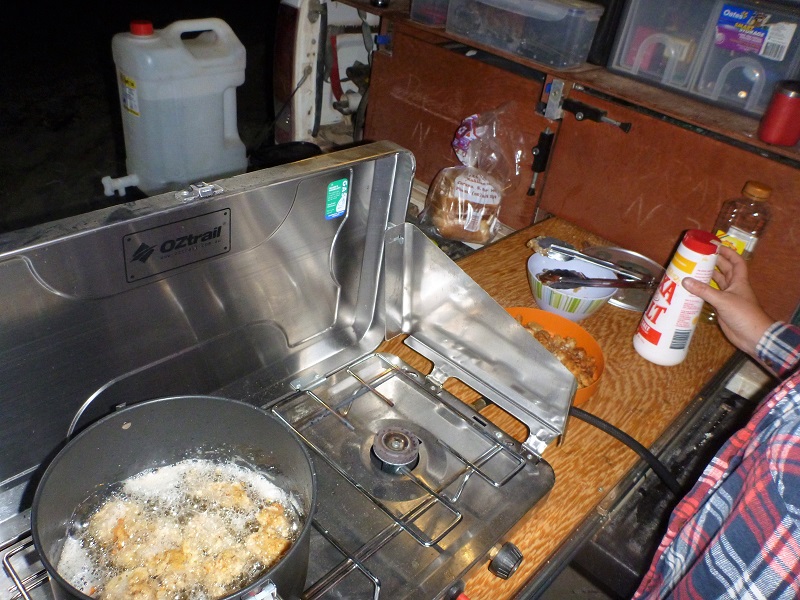 How to Catch Australian Salmon

Our Fishing Setup for Touring / Camping

back to main Fishing page

other articles by outbackjoe