This article is concerned with whether it’s safe to be using a roof top tent on a vehicle. Is it safe just with the weight of the tent and supporting racks? What about when there’s people in the tent?

Putting stuff on the roof raises the vehicle’s center of gravity and changes how the car handles. With load on the roof, it means the car will sway sideways more when under the effects of cornering, driving across a slope or driving over uneven terrain. This impairs handling and increases the risk of rollover. Manufacturers specify a maximum roof load to maintain handling characteristics and ensure the increased rollover risk is kept within reasonable limits. Also taken into account by the manufacturer’s maximum load specification is dynamic loading – how much force will the roof have to support when driving over bumps, corrugations, etc. If you put more than the specified maximum roof loading onto your car and drive, you will experience poor handling, increased rollover risk and increased roof damage risk, more so than allowed by the vehicle’s design criteria.

The manufacturer’s specified maximum roof load is for dynamic conditions – whilst driving the car. It takes into account vehicle handling, rollover risk and dynamic loading. What about loading the roof of the car whilst it’s not moving, as in the case of sleeping in a roof top tent? I have not seen any manufacturer specify a static roof load capacity. It’s a fairly niche parameter, is irrelevant to most people and could mislead some into overloading their roof under dynamic conditions. So it’s up to us to decide whether it’s safe to put a couple of hundred kilos of people and tent on the roof of a parked vehicle. Lets investigate so we can come to some reasonable conclusions.

Road handling is meaningless when not driving. So for a car that is not moving, we can disregard road handling. Rollover is also irrelevant whilst not moving. Loading up the roof of a parked car is not going to make it spontaneously roll onto its side. So rollover risk does not need to be considered. Both road handling and rollover risk require acceleration to come into effect. When not moving, acceleration is zero. All we are left with to consider is the roof’s load capacity. Is the roof strong enough to hold the weight?

Lets consider how strong the roof needs to be to support the manufacturer’s specified load limit. Dynamic loads can be significantly more than static loads. This means we know that the roof of a car can hold a lot more than the load rating, because that rating takes into account hitting bumps and other stressful forces that take place when driving. So most people just assume the roof is strong enough to sleep on. Rather than just assuming, lets do some calculations on dynamic load to give us a guide on the instantaneous loading of a roof under dynamic conditions. This will give us some confidence in the roof’s strength. I’ll use my Hilux as an example. The calculations are based on a series of assumptions and of course will not be perfectly accurate. The point isn’t to provide an accurate number, but rather to give us an idea of what sort of weight the roof can endure.

The manufacturer’s maximum roof loading for my model Hilux is 70kg. Lets assume we’re loaded to 70kg and we’re driving at 80km/h over corrugations that are 1m apart. Lets assume the corrugations are 4cm from trough to peak and the tyres and suspension absorb three quarters of that and that the roof is moving by a distance of 1cm.

At 80km/h the frequency in cycles per second (Hz) would be:

Assuming a sinusoidal profile, 1cm peak to peak displacement corresponds to an amplitude of 0.5cm and the displacement as a function of time would be:

Taking the first derivative, we get velocity:

Taking the derivative again, we get acceleration:

To calculate peak force, use the formula Force = mass x acceleration, using a mass of 70kg which is the maximum roof load of my Hilux:

Note when the vehicle is moving up in its bump cycle the peak force would approximately equal 692kg + 70kg (total 762kg). The roof is not only speeding up the mass, but it is working against gravity. The peak force when moving down will be much less, since the roof is working with gravity and the rate it can fall is somewhat limited by acceleration due to gravity, although the recoiling suspension and associated unsprung mass will pull the vehicle down faster than gravity. The result is a sine wave with a skew towards shorter, steeper up cycles and longer, shallower down cycles.

WARNING: Never hit your head with a hammer.

An experiment you can do to demonstrate how much greater dynamic load is compared to static load, is to grab a hammer and gently rest it on top of your head, allowing your head to support the full weight of the hammer. Note how much it hurts. Next, hold the hammer 10cm above your head and drop it onto your head. Don’t force it down. Just allow it to drop under its own weight. Again note how much it hurts and compare with your first results. I predict you’ll have a sore head! When stuff moves and you start getting accelerations, forces grow rapidly. It’s common sense physics.

According to the calculations above, the roof of a Hilux can hold at least 700kg. But we shouldn’t read too much into the number itself, it may not be very accurate. What we can say though is the roof can hold a static weight many times that specified by the manufacturer. How much can it hold? Not sure exactly, but quite a bit! This is further reinforced if you’ve ever seen a car resting on its roof after a rollover. If the rollover is gentle, the roof is largely intact whilst supporting the entire weight of the car. 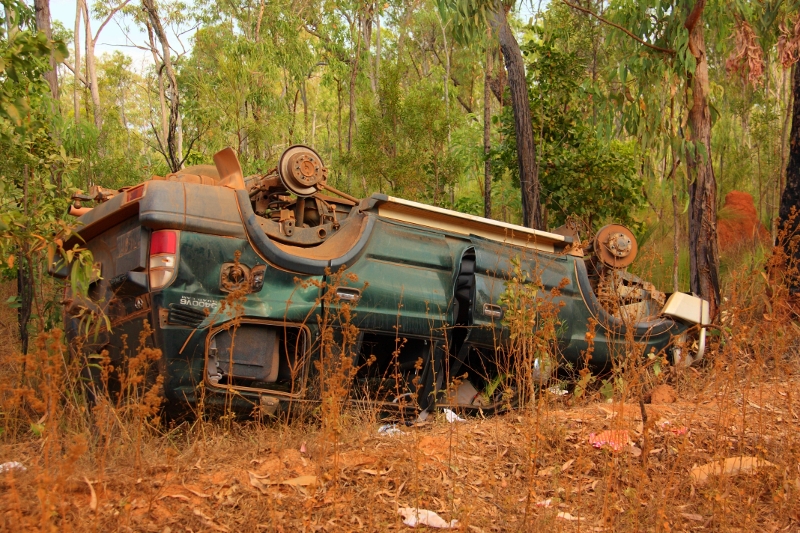 Sometimes after a rollover the roof is still good enough to continue driving around! Just like the car below: 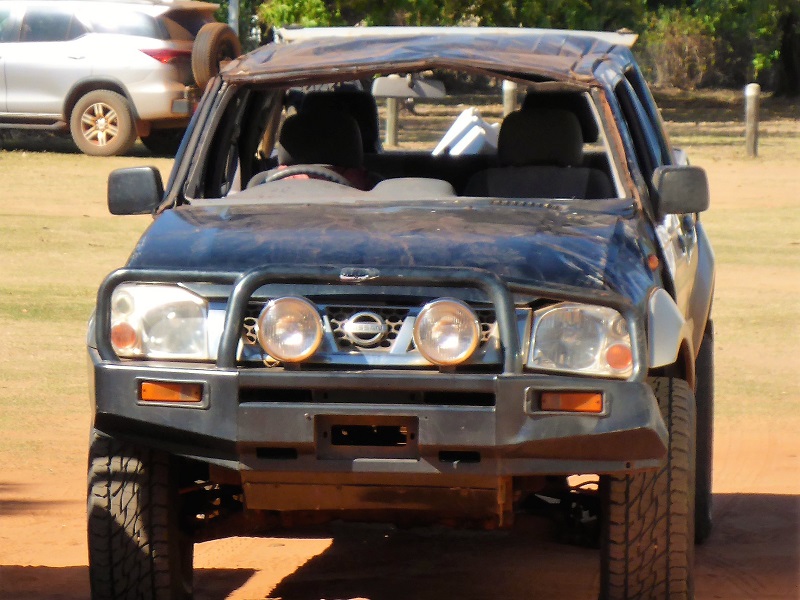 This car pulled into the carpark at the shops at Beagle Bay.

Lets calculate how much weight will be on the roof when sleeping in the tent.

I have a fold out style roof top tent, where half of the tent folds out away from the vehicle and is supported by the ladder. 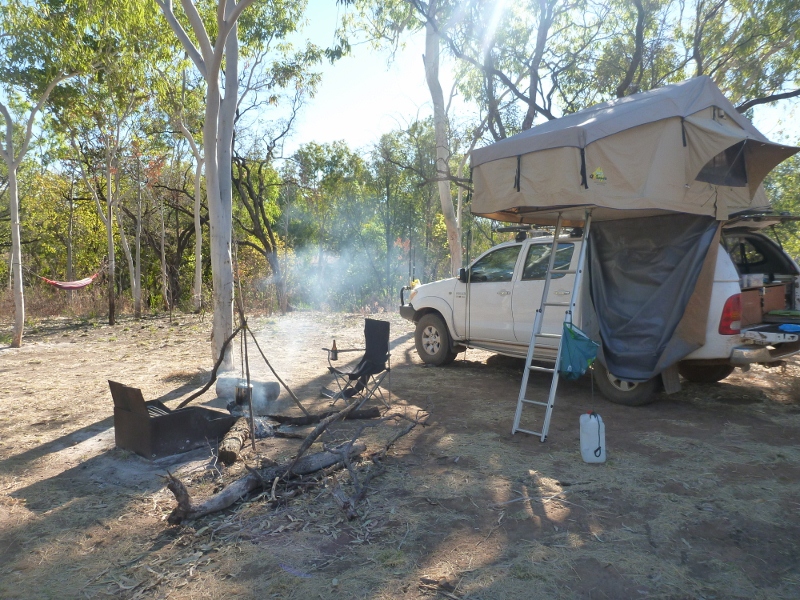 When this type of tent is deployed around 1/3 of the weight is supported by the ladder. For pop-up roof top tents the ladder does not support any load. In the end it doesn’t really matter, but for my example the weight on the roof is:

The total weight on the roof is 143kg – several times less than the 700kg we calculated. So although the 700kg is rough, the gap to 143kg is big enough that we can say we have a good safety factor.

Consider the shape of road corrugations, bumps and pot holes. Are they nice smooth sinusoidal profiles like we assume in the calculations above? If the bump has a sharp profile then the acceleration is higher and the load is higher. The sinusoidal profile is underestimating the peak load that the roof has to endure. The roof is even stronger than we think. What if the obstacle is a large bump bigger than typical corrugations? I could try to roughly calculate the load from a sharp bump based on some linear piecewise functions, but I don’t want scare off bored readers.

Another thing to note is that under dynamic conditions loads are transferred in all directions depending on for example whether the vehicle is turning, speeding up, slowing down, hitting a bump on just one side or both sides, up hill, down hill etc. So the roof is enduring elevated forces from all directions. With a static load, the force is straight down, evenly loading the roof structure and avoiding any twisting forces that would otherwise concentrate stress. So we can be even more confident that for static loads the roof is far stronger than the manufacturer’s dynamic load rating, since under dynamic conditions it must be able to tolerate elevated forces as calculated above, plus tolerate those forces under twisting, uneven distributions where certain parts of the roof may experience an overload condition with the majority of the stress concentrated at certain points.

Another factor to consider is driving over corrugations not only causes high dynamic loads, but it happens under cyclic conditions. The load is constantly increasing and decreasing and changing directions and it happens thousands of times. The roughly 700kg of force that we calculated above is constantly being applied, removed, and reversed. The cycling causes fatigue. To combat fatigue, the roof needs to be even stronger than what we’d expect to simply support the 700kg of force. Sleeping in the tent does not cause the same cyclic loading.

If you are loading your roof top tent onto a support that is completely separate to your roof, as is my case of placing it above the canopy, then you need to ensure the support system’s rating exceeds the weight of the tent. The support system will need to endure the same dynamic loads as the roof would have to, so it will have the same capacity to support a static weight far greater than its specification for dynamic conditions. Note, when driving, your total weight at roof level summed across both the roof and any other support arrangements should not exceed the vehicle manufacturer’s maximum roof loading. Even though some of the load isn’t on the roof, it behaves the same when it comes to vehicle handling and rollover risk. Center of gravity is raised the same amount regardless of whether the load is placed on the roof or on some other roof level support. So for me I have 45kg over the canopy, that leaves me with just 25kg available to place on the roof before exceeding the 70kg limit.

Roof top tents typically weigh in at around 45kg. Add on top of that the weight of your roof racks. If the total is within the maximum roof loading and / or rack loading as specified by the vehicle and rack manufacturer, then you are good to load up your roof top tent. When it comes to sleeping on it, I’m fairly certain that under static conditions the roof will handle the load fine. Maybe if you are an extra cautious person and you’re having special cuddles with your partner then take care not to create excessive impact loads!

A Note About Going Offroad

Some vehicle manufacturers, and some roof rack manufacturers, de-rate their maximum roof load for offroad conditions. This is a consequence of the extreme dynamic loads that can occur when traversing uneven terrain. Plus there’s the extra detrimental effect on handling and rollover risk when the vehicle is being thrown around on rough terrain. You should abide by the de-rating if you intend to go offroad. Even if your vehicle and rack has no de-rating for offroad conditions, you should aim to come in well under the maximum load rating if planning to use the vehicle offroad, and you should drive slowly and cautiously when in rough conditions.