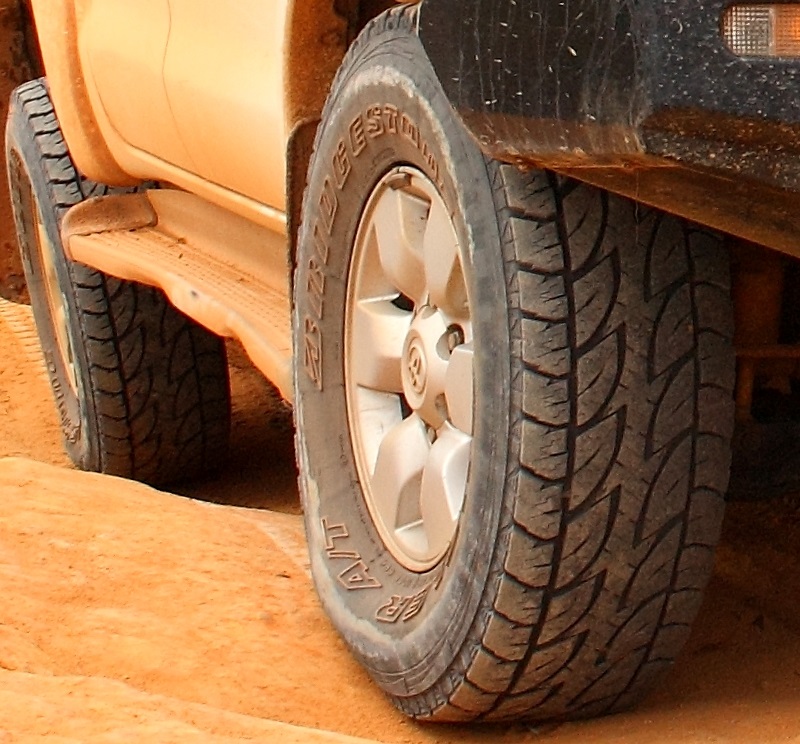 I’ve travelled 48,000km on my Bridgestone D694 fitted to our Toyota Hilux. Nearly all of that has been on our trip around Australia. It’s been around 34,000km since I initially reviewed them. How have they faired since then? Lets see…

You should check out my original review for more details about the story behind these tyres. The conclusion from that review – Bridgestone D694 are excellent performing tyres. They are grippy and quiet and have excellent resistance to cutting and chipping. However they wear out a little fast, with an estimated life of around 50,000km based on how much they’d worn after 14,000km.

The biggest test for these tyres was driving up out of the Pascoe River on Frenchmans Track. We’d heard that the western exit from the river was pretty rough to drive up out of and a possible tyre shredder. It’s extremely steep and rocky – steep enough to require a bit of speed and wheel spin to make it up some of the bigger rocks. We were fully laden with our standard kit for long term living out of the hilux plus we’d stocked up on food and beer in Cooktown and filled up all our fuel and water tanks to capacity in Cohen. So the hilux was weighing in pretty heavy which is quite harsh on tyres. 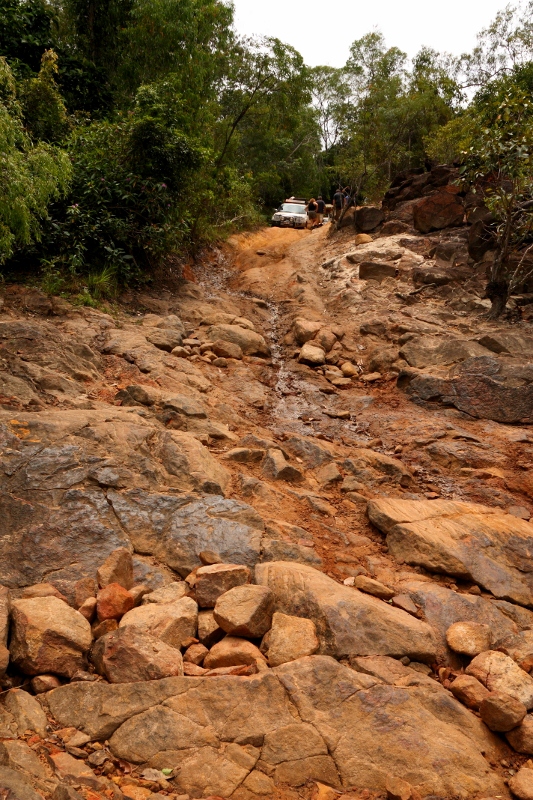 Given the terrain and loading these tyres have endured, they look remarkably good. Pretty neat all round really. Most edges were pretty crisp apart from some superficial cuts and blemishes. The sidewalls were basically perfect – I found no cuts or marks at all. A testament to my driving skills perhaps? The tyres can take part of the credit. 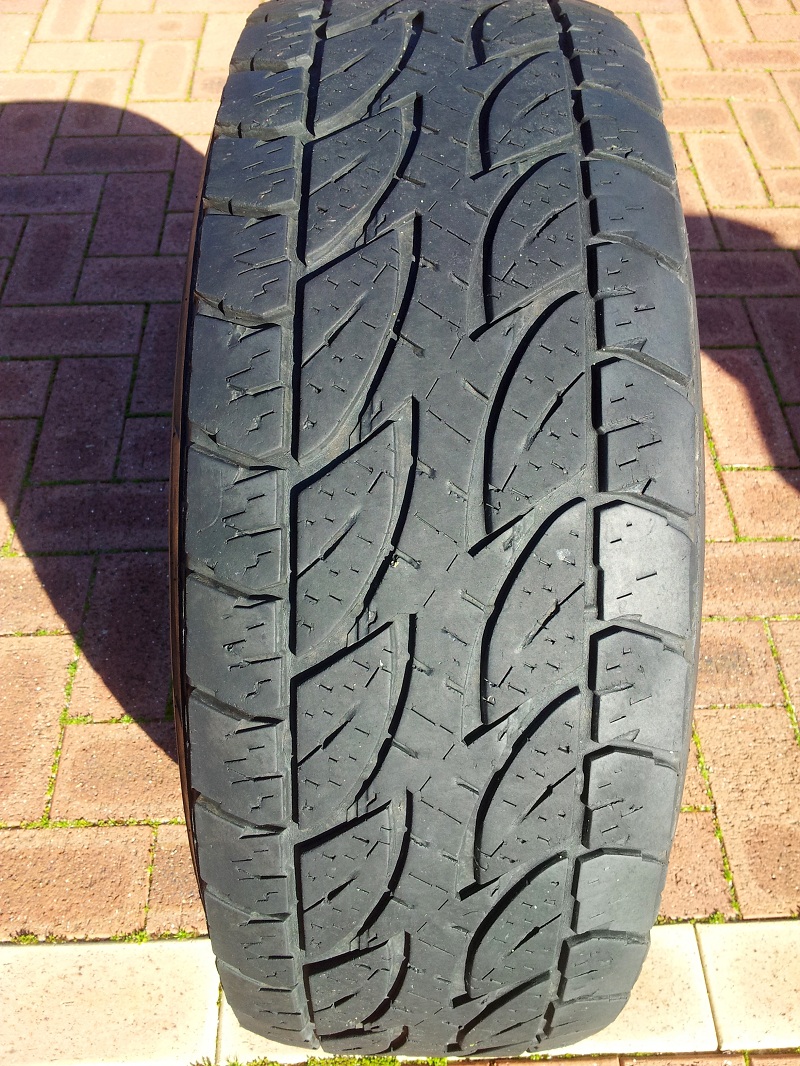 One of the front tyres after 48,000km. Looking pretty sweet.

The rear tyres were a little rougher looking than the front but still pretty good. My last tyre rotation was just before heading to the cape.

Closeup of rear tyre. Some cosmetic injuries but not much to report.

A thorough inspection did reveal one significant cut as you can see in the photo below. Probably got it climbing up some of the big boulders as we exited the Pascoe River crossing on Frenchmans Track.

This was the only significant damage I could find on any of the tyres. The cut went down to the first layer of cords but did not penetrate through them.

My opinion on the D694’s performance remains unchanged from my original review. They handle any conditions really well and have superior grip. They’re strong and dependable and I didn’t suffer any punctures or problems at all during my tour around Australia. Mud is their only weakness bus this can’t be avoided in an all-terrain tread pattern. I did notice noise levels crept up slightly as they wore, but only marginally. Still pretty quiet.

In my last review I was disappointed with how quickly the tyres were wearing. The prediction of around 50,000km life from my previous review ended up being a little premature. Their wear rate did decrease slightly. See the table below for in depth measurement results of my tyres after 48,000km of travel.

So the average expected life that I calculated to wear down to the legal limit is about 70,000km. This is better than what I first estimated but still not great considering reports of some other brands of tyres. But maybe it’s not too bad for a heavily loaded vehicle doing lots of offroading and lots of highway work on hot bitumen. But then I drive slowler than you’re average Joe especially since I like to save fuel due to my extreme tightass nature. I’m always looking at ways to save money so I can retire early and go camping more. I guess I really need to do more kms and keep travelling around Australia and try some different brands of tyres so I can get a proper comparison. I’ll get onto it right away.

I ran my tyres at pretty high pressure on bitumen. The vehicle was heavily loaded and according to my calcs the rear tyres would have been at close to rated load so I pumped them to the rated pressure. This helps reduce heat loading on the tyres and potential heat related failures which is especially important when fully loaded driving long distances on hot roads.

My tyres have worn in the middle a bit more than the edges. Not by much – ranging from not at all up to 0.7mm extra wear in the middle compared to the sides. Did I run the tyres a bit too hard? Probably, in terms of ideal even tyre wear. But the tyres got freakin hot in the summer up in Northern Australia and I’d rather err on the side of caution. Plus, according to Mythbusters, the extra pressure would have saved me a couple of % in fuel, offsetting the small reduction in tyre life. Of course on gravel roads and when offroading I ran reduced tyre pressure. I’m a massive advocate for low pressures when off the bitumen. I wrote a tyre pressure guide detailing this.

I had a chat with a chap at a tyre shop about tyre pressures and how some say modern tyres don’t suffer from extra wear in the middle when inflated at high pressures. He said that’s what the manufactures were thinking for a while but after more experience they are now saying they believe high pressure does contribute to more wear in the middle. This is consistent with my findings. The tyre man said manufacturers are now recommending people running high pressure based on their previous advise should drop it back a couple of PSI if they want more even tyre wear.

Damaged tyres from truck tie down

Closeup of cuts and gouges to sidewall

I sent an email to the transport company with photos of the damage and to my surprise they agreed to replace all 4 tyres at their cost. I was thinking they’d pay for half or a third since the old tyres were well used already. But lucky for me they replaced them all with 4 brand new Bridgestone Dueler D697s! 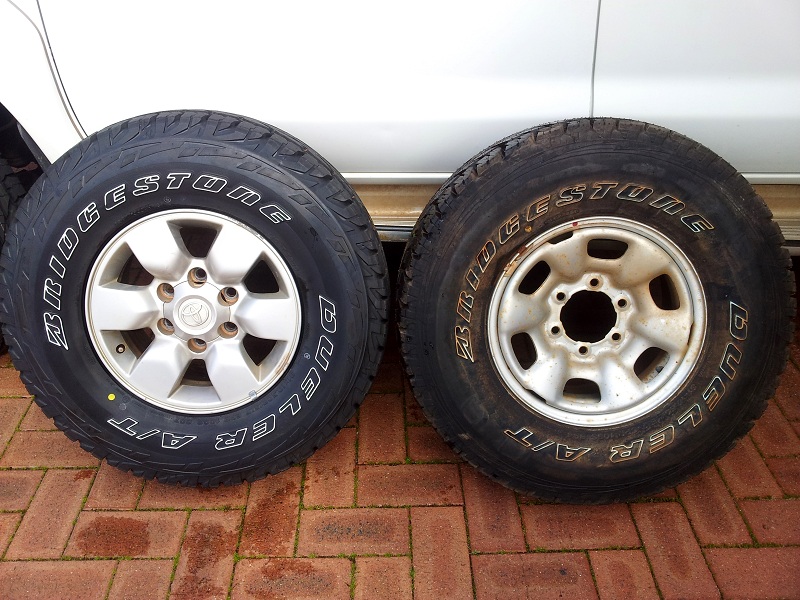 So I’ll never know how long the D694s would have lasted thanks to the incompetence for the transport company. I don’t mind leaving it a mystery – I got 4 new tyres out of it. Apart from wear life I was really happy with the tyres. In the end wear wasn’t as bad as what I first thought, although still not best in class. The grip, strength, low noise and resistance to chipping / cutting made the D694s a reliable choice to tour around Australia with. Click here for a review on the replacement Bridgestone Dueler D697 tyres.

Do You Need a Suspension Lift Kit?

Why No Diesel Performance Chip?